Strategies for scaling up

Depending on the type of R&D project, the scalability of the technology in question may not be an issue. But then, every researcher wants to demonstrate the applicability of his or her findings to the real world – and others may share this expectation.

As Carlos Diaz at Rochester Institute of Technology (RIT) puts it: “When you’re talking about research funding, people want to see a path to commercialization.” 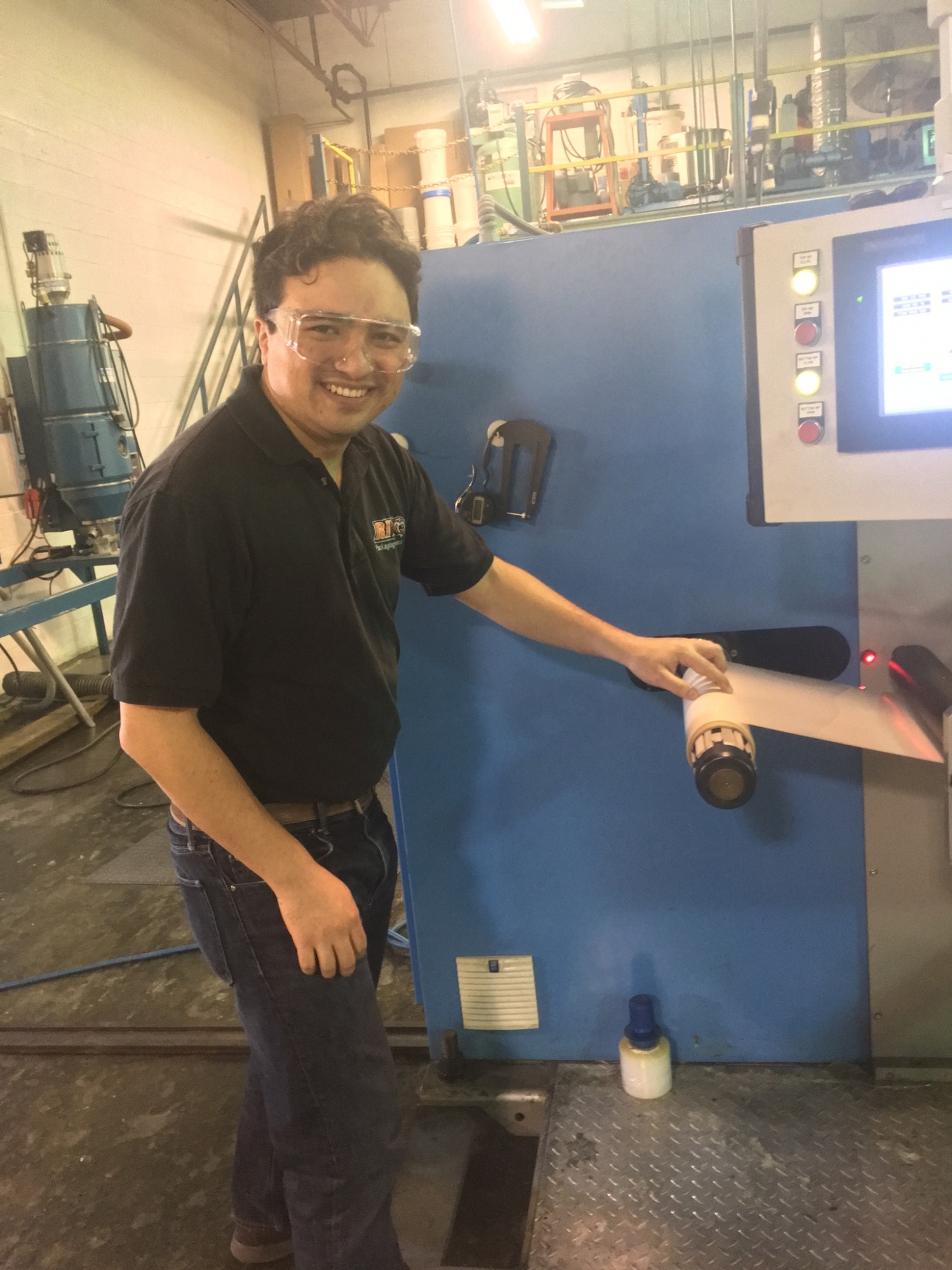 Diaz and his team at RIT have presided over a few examples of scaling-up. At the 2019 IAPRI Symposium, he presented a paper regarding the extrusion of biopolymer film and subsequent tray thermoforming. This involved a material which blended different biopolymers and bio-additives (including polylactide, PLA) with a calcium carbonate filler.

“We wanted to produce prototypes on industrial equipment,” says Diaz. “We partnered with extrusion equipment manufacturer Leistritz and with additive manufacturer and fellow IAPRI member Omya. We rented the Leistritz extrusion lab in New Jersey for a day.”  It was quite a challenge to suddenly be producing 500 pounds (227kg) of sheet, he adds, rather than the small lab-scale volumes they were used to.

In fact, it was not the upscale hurdle of extrusion that proved hardest to clear – but the next. “We’d also partnered with a converter, and the idea was that, once we had the sheet for thermoforming, we’d run it through the converter’s equipment,” he recalls.

But the limitations of the extrusion stage meant that, while the converter’s thermoforming machinery required an 18.5-inch (47cm) web width, the team had only been able to produce sheet with a width of 12 inches (30.5cm) on the Leistritz line. 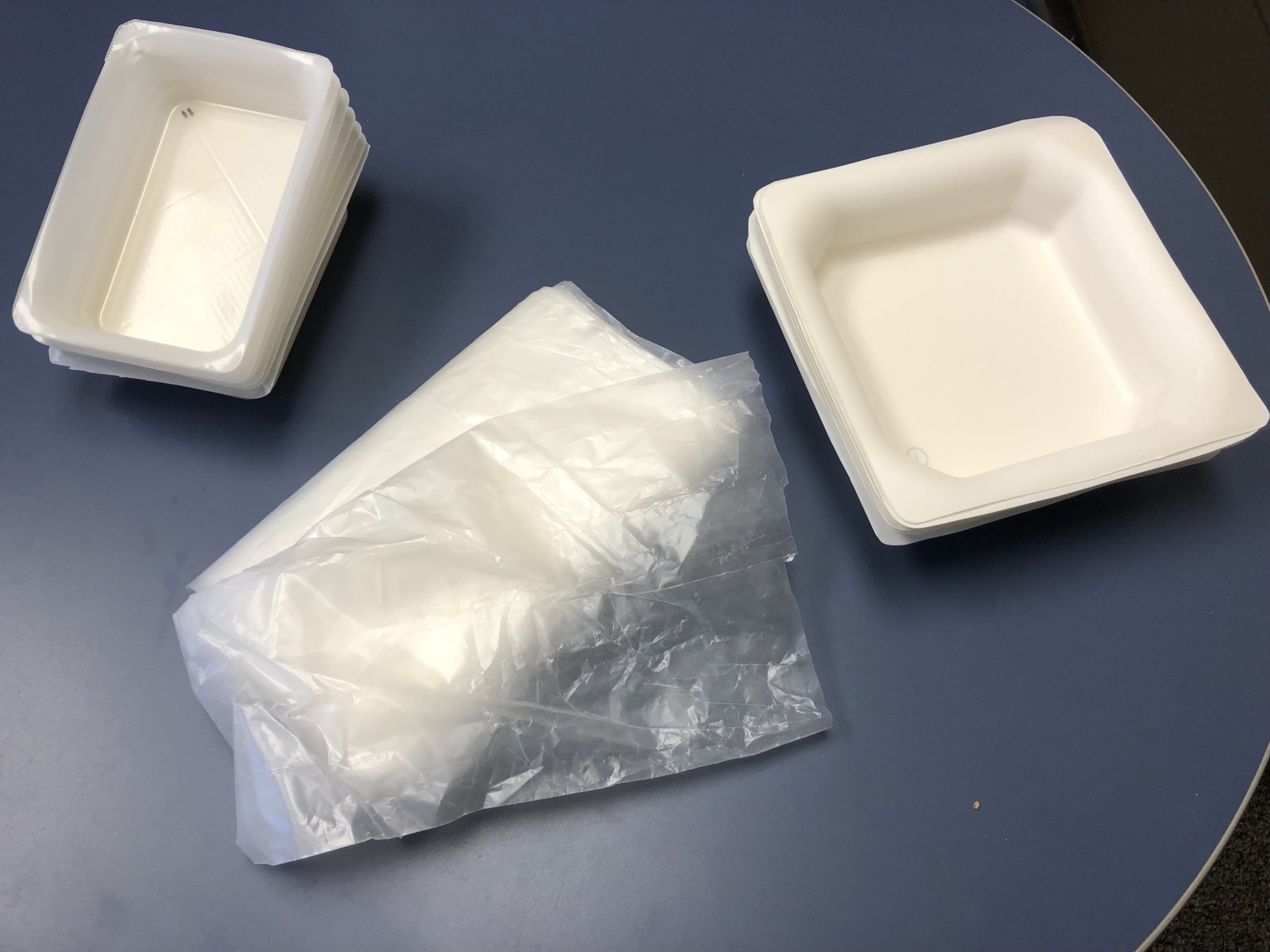 “We ended up having to produce our trays on a lab-scale thermoformer,” says Diaz. But the research concluded it was feasible to manufacture trays suitable for anaerobic degradation with a high mineral content. 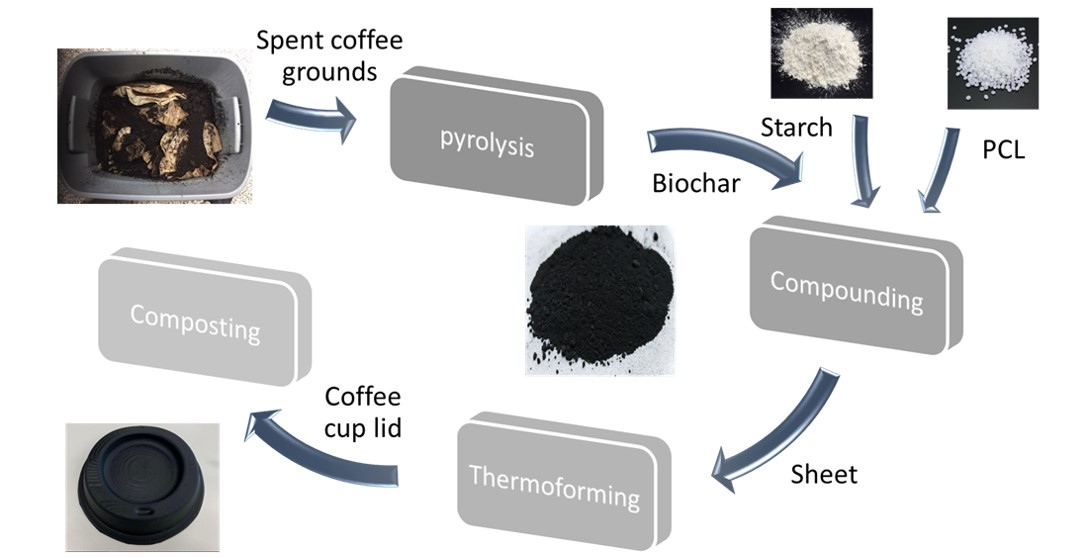 RIT researchers have been following a similar trajectory with a current project looking at composite materials made with biochar from organic waste– one of the output products of pyrolysis. “The questions are now about how we take what we’re already doing in the lab to commercialization,” Diaz explains. “We’re thinking about the supply chain, feedstock, finding a converter, what the sustainability story is, and so on.”

It is also, he says, about finding a way to protect the intellectual property (IP). “We’re having these conversations, and putting together a business model,” he says.

Longer-term, of course, successful technologies can be spun off as businesses in their own right. “Places such as RIT are heavily invested in incubators,” says Diaz. “One of their jobs is to find people to run with a given technology and put it in front of investors. But before that stage, you have to get over the top of the hill in terms of making it commercial.”

One challenge is the way that the quality and consistency of the biochar is heavily dependent on the pyrolysis feedstock. “We are looking at the effect of changing feedstock,” he reports. “If you want more control over the quality, then you have to ensure you have homogeneous feedstock.”

Currently, one option is to apply biochar from pyrolysed coffee grounds to composites for take-out coffee cups in the foodservice sector.

One IAPRI member with a clear vision on pilot-scale production is Finland’s VTT. “The challenge with scaling up is that very few people actually do it,” says customer account lead Jouni Lattu. “We’ve taken it on as our job, helping to reduce the fear factor for industry – where otherwise, for business, this kind of process can mean risking multi-million Euros of investment.”

This capacity for moving from lab-scale to pilot production is not only about equipment. “You need to add both equipment and people,” he says. “Ideally, you have people who’ve been doing the job for 10 years or more, so you have the accumulated knowledge.”

Inevitably, for any given project, some services will also need to be bought in, but core in-house plastics technologies which VTT runs at pilot scale include extrusion, injection moldings and thermoforming.

A strong example of VTT’s approach is the Thermocell project. Here, cellulose is being combined with bio-based fatty acids to create a thermoplastic which can replace fossil-based polymers in commercial packaging applications. VTT is working with converter Wipak and brand-owners Paulig and Arla Foods.

Moves from pilot to industrial stage, together with adjustments to the biopolymer, are still ongoing. In a statement, Kati Randell of Paulig says: “The development of Thermocell still requires work to ensure that it can be used with machinery, and that it has a long shelf-life, among other features.” 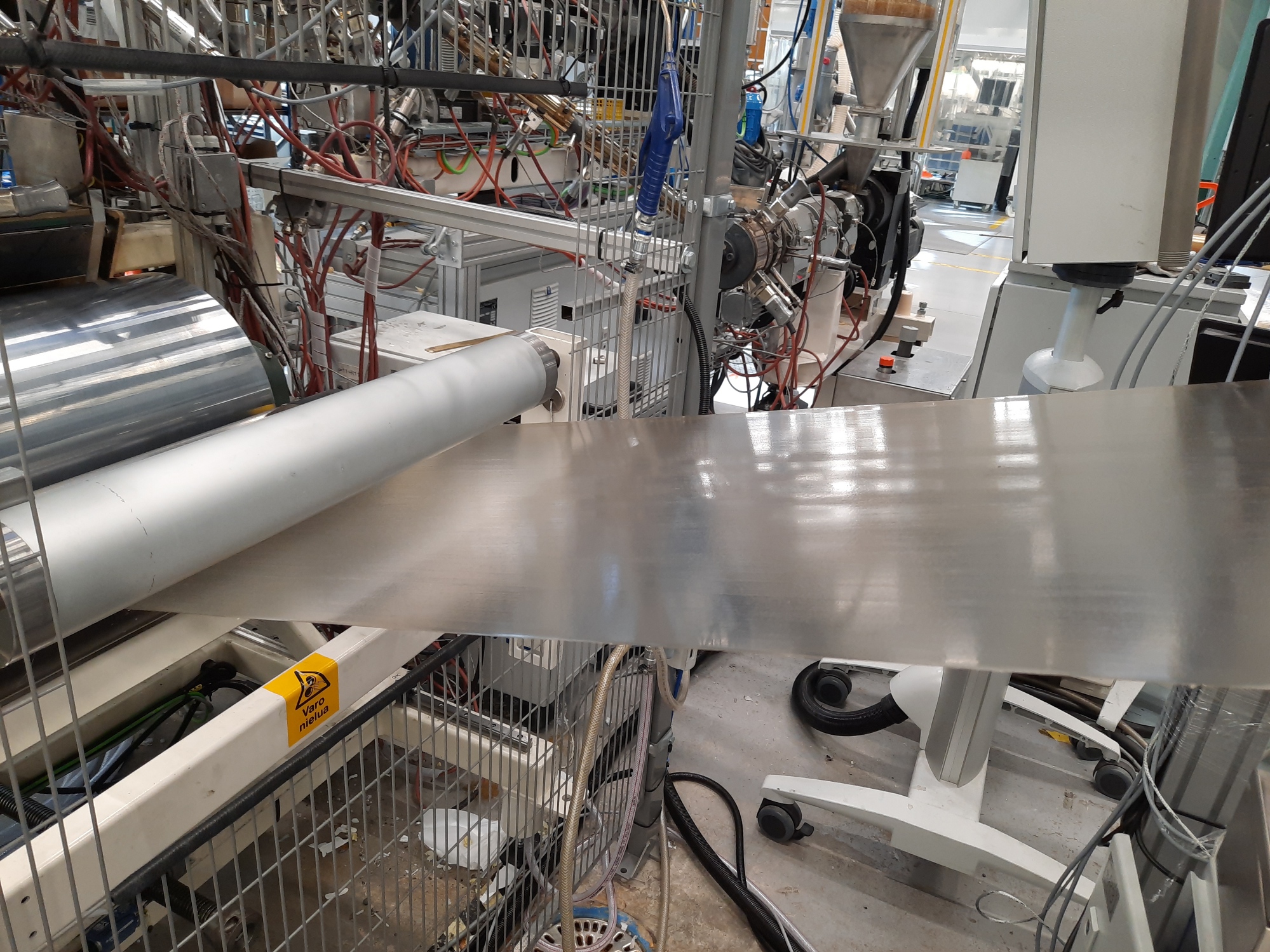 VTT produces the polymer in small and pilot-scale stainless steel reactors, managing temperature and pressure to ensure the esterification process unfolds as required. When granules have been produced, these can then be fed into the in-house extrusion line. “The big advantage here is that you can achieve fast iterations and feedback, then go back and produce another batch,” says Lattu.

Batches may be between 100kg and 300kg, at this stage, with extrusion output at around 100kg per hour.

Beyond this point, the granules will be shipped to Wipak. “We can assess line speeds, tension, and so on, on an industrial line, and later check for film properties such as barrier,” he says. From there, the film rolls would be shipped to the two brand-owners for final testing of the product packaging.

As VTT research team leader Jarmo Ropponen explains in a statement: “Our goal is to show that Thermocell can be produced on an industrial scale, using the same equipment that is used for traditional plastic films.”

“We’re still tailoring the actual polymer granule, trying to minimize additives,” says Lattu, drawing a contrast between VTT’s material and others. “With traditional cellulose acetates, for example, you need a lot of additives to make them perform on the line, and manufacturers really don’t want that.”

Longer-term, the plan would be to set up a 30,000-tonne factory for Thermocell, initially, later moving up to a 100,000-tonne output plant, but remaining relatively small-scale. 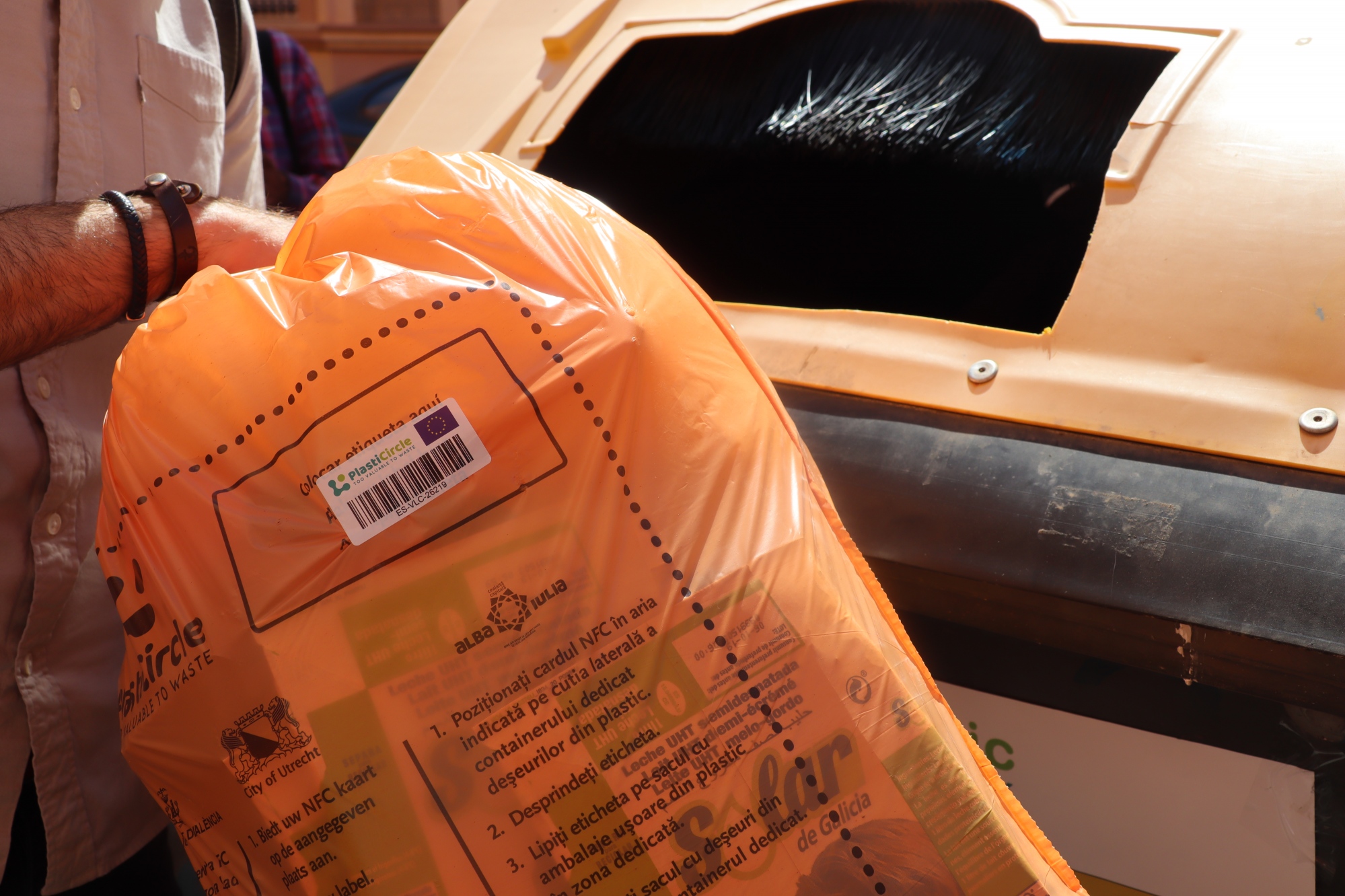 Like Carlos Diaz’ presentation on PLA composite trays, another paper delivered at IAPRI’s last face-to-face Symposium in 2019 looked at a scalable technology, though of a very different type. In this case, the prize-winning presentation from ITENE, Spain, described a part of the European PlastiCircle project.

The project as a whole addresses the collection, transport, sorting and reprocessing of waste plastics packaging. The symposium paper examined ITENE’s role in developing and then rolling out a technology for monitoring domestic waste quality in an urban setting. Citizens who register to use it could present a card at the street container, the system generated a label to identify their sack of sorted waste, and the household received rewards and feedback on the basis of their contribution.

Head of ITENE’s Recycling Systems Unit César Aliaga takes up the story: “Each street container for recycling was equipped with a module the size of a shoe box. We had a system concept, designed it from a hardware point of view, and assembled it. In the end, we made 30 of them. We did it ourselves, in-house. We are also analysing the possibility of collaborating with industrial partners after the project to improve production times."

As a part of the European project, the same system was replicated in Alba Iulia, Romania, and a similar approach was trialled in Utrecht, the Netherlands.

“The next stage is a market analysis and a business plan, looking at expectations and requirements, with a view to commercialization,” says Aliaga. Waste businesses are already looking at ITENE’s strategy. “One company is interested in adapting the module, and another wants to send stickers, for example, directly to the household. Europe is very diverse.”

As he explains, while the street-container module is important, it might account for around one fifth of the overall processes involved. “It’s also about the waste characterization protocol, filling levels, the formula to calculate performance, driving household participation, overall data collection, and so on,” Aliaga says.

For the wider project, impressive results have also been achieved in areas such as plastics sorting, with partner PICVISA, and in final recycling, with five different application areas trialed with post-consumer plastics. The final PlastiCircle forum will be held on 13 April this year.

Shortcuts to the shelf

Finally, ‘scaling up’ is not always to do with the nitty gritty of new materials and production. Any practical changes may come from a brand-owner, retailer or other supply-chain partner, with the research team providing ideas and evidence. This evidence can take the form of consumer research into preferences, behavior and perceptions.

This was the case with research carried out by Karlstad University, Sweden, around three years ago. “We were working with businesses through the whole supply chain, looking at how to improve packaging and reduce food waste at the same time,” says Helén Williams. “We were digging into how consumers used products such as bagged mixed-leaf salads, interviewing them at home and in-store.”

In this category, salad leaves are typically packaged in sealed 65g bags. As Williams explains, although one key research objective was to ascertain how much product was thrown away, consumers might not like giving a straightforward answer to such a direct question. Instead, they were asked whether they finished the entire package on every occasion.

“We had 60 respondents in our study, and 70% said they didn’t finish the leaves in the bag,” she reports. “We also gathered more qualitative data from the interviews.”

Consumers were able to trial sample 25g or 30g bags, and provided feedback on these. “One of the producers went all the way with this, and took one of these smaller bags to market,” Williams confirms. “I’ve no idea how it’s performing commercially, but it’s still on the shelves today.”

In this case, she admits, progress from research project to commercial reality was helped, not only by the extra qualitative findings from the 60 households surveyed, but also by research from the UK which highlighted the problem of food waste with packaged leaf salads.