For many years now, systems for creating viable active & intelligent packaging for food and drink have been known about and researched. In some cases, barriers to wider commercialization have included cost, consumer (and sometimes business) acceptance and reliability.

But as virtual presentations still available as part of IAPRI’s 2020 Online Conference demonstrate, there remains huge interest and potential commercial applicability in marrying up tailored systems with a given pack, product, supply-chain and storage conditions. This is particularly the case with active packaging options where antimicrobial agents are being matched with a highly-specified carrier matrix for optimal controlled release.

In one such piece of research, a team from the Institute of Food & Beverage Innovation at Zurich University of Applied Sciences (ZHAW), Switzerland, has been examining ways of combining functionalized calcium carbonate (FCC) with antimicrobial essential oils in food packaging applications.

Taking on Listeria
In her presentation, ZHAW’s Nadine Rüegg outlines the role that volatile essential oils can play in inhibiting the growth of Listeria monocytogenes by acting in the headspace of the pack, without direct food-contact. In this case, the FCC utilized was a structure developed by IAPRI corporate member Omya International, Switzerland, incorporating hydroxyapatite as well as calcium carbonate. The precise specification of the FCC ensured it offered high porosity and an extended surface area.

“The aim of our project was to investigate the potential of FCCs as a carrier system for essential oils, towards the development of antimicrobial packaging,” Rüegg explains.

The team then went on to evaluate the stability of the essential oils (cinnamon, clove, oregano, rosemary and thyme) on FCC and to carry out antimicrobial tests, both in vitro and using food samples, against Listeria innocua. Tests were run at 37degC and 7degC after one and six days, and at loading levels on the FCC of 5%, 10% and 30% by weight of essential oils.

Regarding stability, Rüegg says: “There’s a challenge: FCC may trigger ester hydrolysis and/or oxidation in natural products, because of its high surface area.” Some essential oils, such as rosemary, showed greater stability than others. “It may be that the stability of the essential oil compounds will improve when tests are performed under modified atmosphere, with very low oxygen levels,” she adds.

“Higher antimicrobial activity of FCC loaded with essential oils against L. innocua was achieved with in vitro tests than in food tests, probably due to differences in food test design and to differences in the content and structure of the food and other media,” Rüegg explains. “Maybe there were interactions between components of the essential oils and of the food, especially fat and proteins. This may have resulted in lower antimicrobial activity.”

The variations in log reduction based on product choice and temperature serve to emphasize the need for vapor-diffusion tests in association with the specific food, when choosing the essential oil for an antimicrobial role, she concludes.

“The next step will be to integrate FCCs loaded with essential oils into packaging materials in order to study antimicrobial activity under real-life conditions,” Rüegg says.

Hexanal effects
This is not the only research in the Active & Intelligent Packaging section of the 2020 Conference to focus on controlled release of active antimicrobial ingredients, as Ajay Kathuria of Cal Poly, California, explains. “Our study aimed to evaluate the encapsulation of hexanal in cyclodextrin-based metal organic frameworks (CDMOFs) for active packaging,” he says.

He defines MOFs as “a new class of porous crystalline compounds”. “They are known to have a very high surface area and a high encapsulation capacity for sustained release over a relatively long period of time,” says Kathuria, adding that this makes them especially suited to active packaging applications.

In this case, the CDMOF was synthesized using cyclodextrin and potassium ions. Hexanal, he explains, has been used as a cost-effective antimicrobial and antifungal agent in active packaging for the last 20 years or so. The aim was not only to synthesize a structurally-stable CDMOF and encapsulate hexanal, but then to quantify the encapsulation effi

Characterization and evaluation were carried out using a scanning electron microscope (SEM), x-ray diffraction (XRD) and thermo-gravimetric analysis (TGA). SEM imaging showed the crystalline nature of the CDMOF. “XRD studies also supported its crystalline nature,” says Kathuria. “It was observed that a little over 5% of hexanal was encapsulated in the CDMOF.”

The plan for future research is to examine the release kinetics of hexanal, with a view to utilizing its antimicrobial properties in fresh food applications. “We will also be carrying out computational studies to understand the exact nature of [nanoscale] host-guest interactions there are between CDMOF and hexanal molecules,” he states.


Protecting tortillas
In another paper looking at active packaging options, Ana Ibarra of Mexico’s Centre for Food Research & Development (CIAD) presents some interesting findings relating to orange blossom essential oil (OBEO). The CIAD team researched its use as an antimicrobial and antifungal agent in film packaging for corn tortillas.

Water activity levels and humidity, combined with the nutrients in the ingredients, make tortillas a potential breeding ground for microorganisms, says Ibarra. Shelf-life of the wrapped tortillas is typically three days at room temperature or around eight days in the fridge. “To extend shelf-life, some additives such as sorbates and propionates are used as artificial preservatives,” she says, but points out that these can have adverse health impacts. 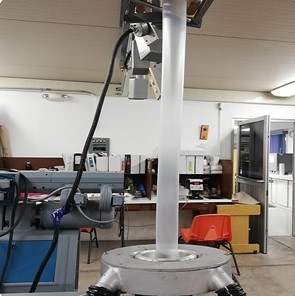 Although there was a loss of active compounds in both converting processes, the final concentration of linalool was approximately the same in both types of packaging, says Ibarra. 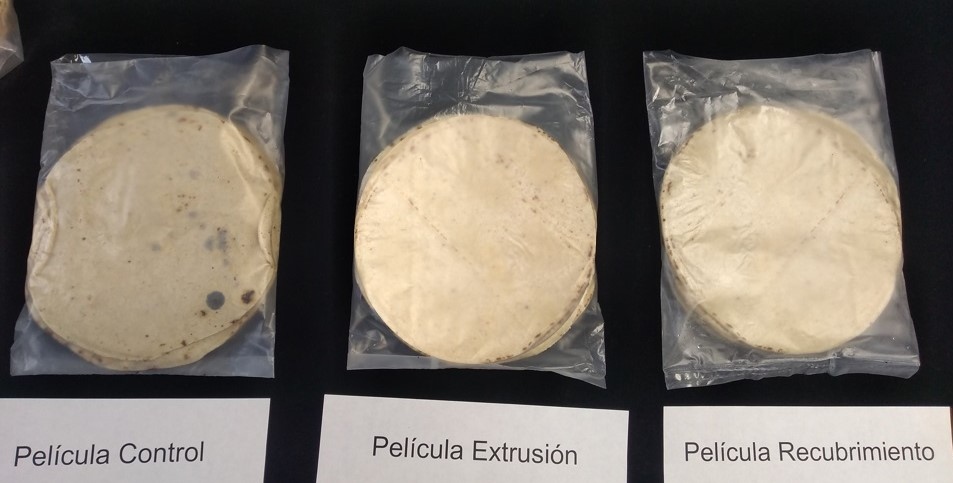 “The co-extruded film and coated film extended the shelf-life of corn tortillas by 53% and 66% respectively, compared with the control packaging,” she says. When it comes to packing these types of product, she adds: “The use of essential oils could be an alternative to the use of artificial preservatives.”

However, there could be challenges in terms of acceptance, in the light of consumer sensorial tests. “The active packaging showed acceptability higher than 80% for smell, but 38% for taste,” Ibarra reports. Future research options include modifying the OBEO concentration to decrease the impact on product flavour.

From fresh to fortnight
Finally, when it comes to intelligent packaging, Ana Romero of Clemson University in the US assessed two color change indicators in HDPE bottles. “My research goal was to evaluate cow’s milk packaged in two different intelligent packaging prototypes, based on pH, color change, sensory attributes and volatile organic compounds (VOCs) during shelf-life,” she says. 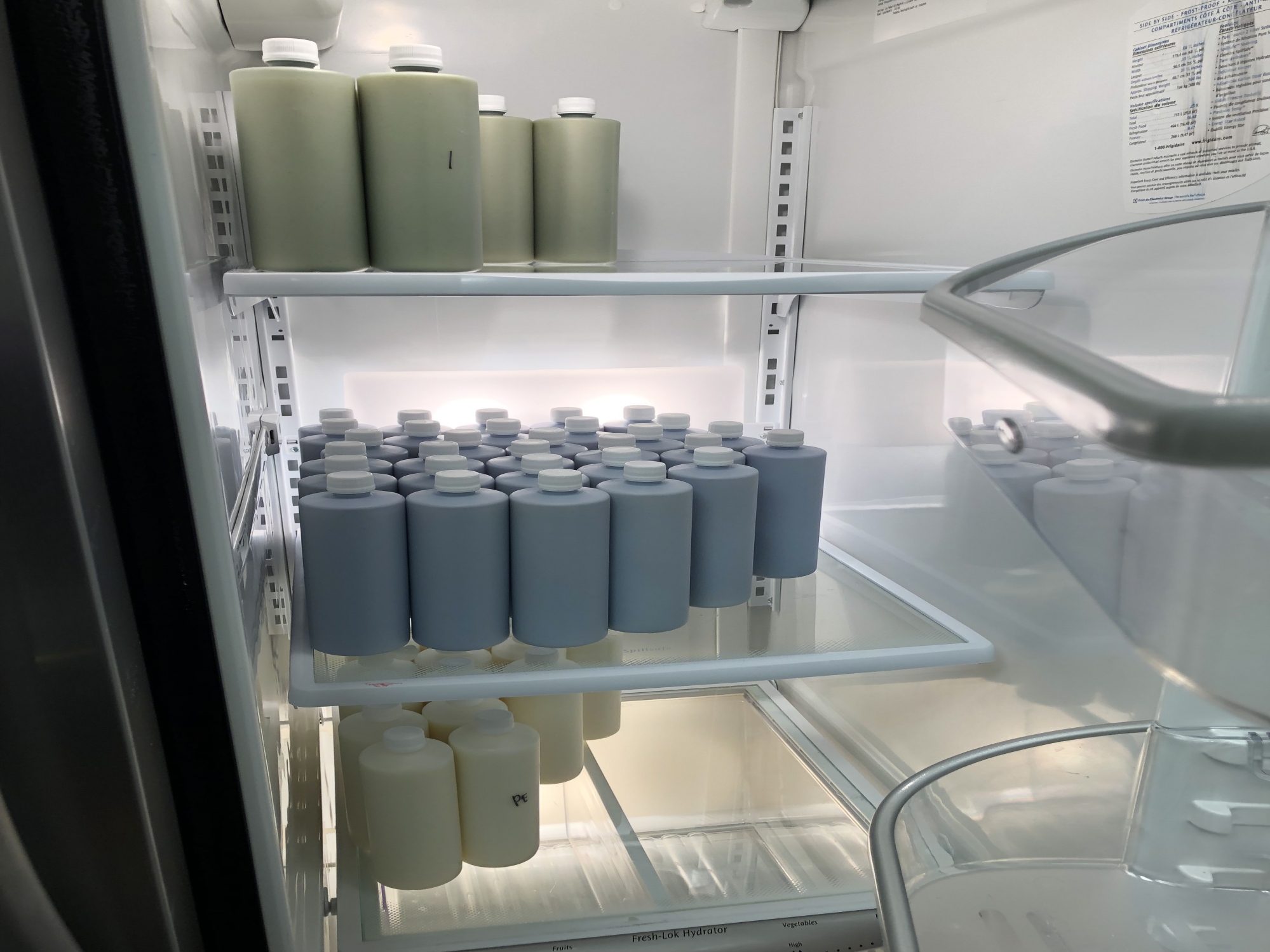 Analysis, including gas chromatography/mass spectrometry for VOCs, was carried out at intervals between the first and fifteenth day of shelf-life. Tests also included a sensory panel. But, since previous studies usually tested samples at room temperature, differences over time tended to be more extreme.

“To our knowledge, our study was the first measuring the color and pH change of the intelligent packaging at a lower temperature - that is, 4degC,” says Romero.

“Regarding VOCs, three phthalate compounds migrated from the bottles into the milk,” she adds. The volatile compound hexanal was also detected, and this could be utilized as a potential biomarker for oxidative stress in milk, Romero suggests.