The place of packaging in Industry 4.0

Ever since the German government fuelled awareness of the concept by utilising it to present its technology strategy back in 2011, the theme of Industry 4.0 has inspired development across the consumer goods, equipment, automation and packaging sectors (among many others), bound in as it is with other prominent buzzwords such as the Internet of Things (IoT) and Big Data.

Now, for IAPRI’s Online Conference (iaprimexico2020.org for details), the University of Monterrey (UDEM), Mexico, is taking Industry 4.0 as an overarching theme, and as a prism through which to view the wider future of the packaging industry and packaging research. But what exactly is the relation between packaging and the various facets of Industry 4.0?

UDEM’s Cristina Guzman points to three key aspects: the potential for personalisation (sometimes referred to as Batch Size 1 in areas such as medical products); e-commerce and multi-/omni-channel distribution; and digital security.

She points to the inherent tension between mass production and the emphasis on personalised products (and therefore packaging) in certain consumer categories. But advances in areas such as machine learning and data transfer have made this level of customisation possible – in theory, at least.

Also potentially pulling in opposite directions, as Guzman notes, are the consumer appetite for personally-tailored products and the desire to limit expenditure. This suggests that, initially at least, higher-cost, personalised products will be limited to higher-value segments such as medical and specialist nutrition products.

It has been noted how the coronavirus pandemic appears to have accelerated certain societal and economic changes that were already underway, from remote working to flatter company structures. Among the changes that are more relevant to packaging are the surge in interest in e-commerce, especially in areas such as food and drink, and a growing readiness to invest in automation.

In a recent study, Smithers identified automation and robotics as one of five major areas of change that will become more important over the next three years or so and which, taken together, will create the necessary conditions for this ‘fourth industrial revolution’ to take place. The other four areas picked out in the report were: smart packaging; Big Data and cloud computing; mass-customisation and e-commerce.

So, what about the package itself? The specific theme of ‘smart packaging’ is explored in another, new report from Smithers: The Future of Active & Intelligent Packaging to 2025. The report, to be published in June, estimates that the value of the global active & intelligent packaging market will reach US$6.3 billion during 2020 and will grow annually at an average of 6.2% to 2025. This expansion will predominantly be driven by wider uptake of intelligent packaging technologies, according to Smithers.

But packaging is also increasingly ‘smart’ in the sense that more data can be compressed into codes, which in turn can be scanned and processed at much higher production speeds, explains market analyst at Smithers Georgy Cameron. “Smart packaging provides a method of tracking and monitoring several different factors within the supply chain,” she says. “Examples include printed barcodes and QR codes, as well as radio frequency identification (RFID) and near-field communication (NFC) tags and sensors.”

Increasingly, codes and other types of marking are being used to support recycling, both by advising consumers (through QR codes, for instance) and by allowing a much finer level of materials sorting prior to reprocessing. “An example of this is the HolyGrail project, which was led by Procter & Gamble (P&G),” Cameron explains. “The project looked at how digital watermarks affected the accuracy of the recycling system.”

This is true, but the fact that the code (which is close to being invisible to the human eye) can be reproduced over the surface of a pack means that it has much wider applicability. As she points out, like other types of tag, it can be used for brand protection. But it can also allow much faster scanning at the retailer check-out. 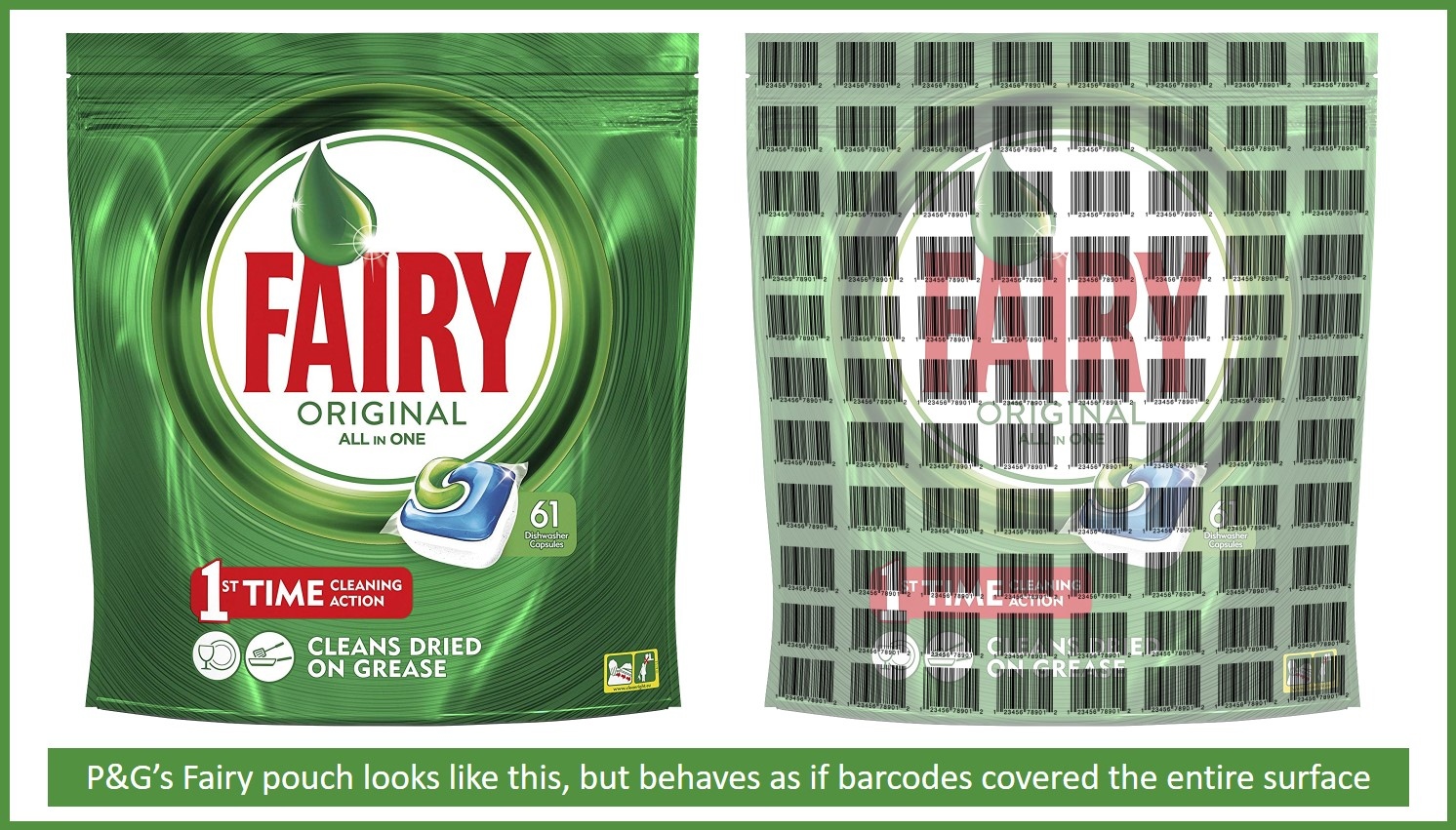 Cameron adds: “The future of smart packaging is positive, and it can be seen as a base to build on towards Industry 4.0, with electronic tagging and sensors extending the capabilities of real-time track-and-trace within the supply chain.”

Alongside the wider supply chain, the relevance of a dense code such as a digital watermark is very much to do with production data for the factory of the future, allowing each pack to be automatically routed from primary to secondary and end-of-line packaging, even at the highest speeds.

In some other ways, the changing requirements of the package in an Industry 4.0 setting are not always obvious. At the University of Twente in the Netherlands, Roland ten Klooster has been seeking to establish how much of an overlap exists. “At our university, there is a large centre working on Industry 4.0,” he says. “We have been looking at areas of mutual interest, but these have been hard for us to define.”

He agrees that chips and tags will become increasingly important but, potentially, only for higher-value products.

Of course, if the package and packaging materials are the primary areas of research for most IAPRI members, these need also to be considered in the context of the packaging lines they run on. This theme of packaging equipment brings us back much closer to the central concerns of Industry 4.0.

In its report on this topic, Smithers makes the point that a new generation of robotic systems, as well as improved data flow, means that stages in the creation of packaging such as design, production, distribution and equipment maintenance can be connected in a single holistic system, rather than being restricted to “separate islands of automation”.

In fact, the manufacturing process of the product and the packaging around it will be much more closely integrated, in many cases, linking not only to the tracking of different raw-material batches within the factory but also allowing more detailed data on provenance to reinforce consumer confidence.

Automation and data processing are also about the efficiency of packaging lines. The fine-tuning of algorithms means that, in a packaging context, systems will be able to analyse data from a huge number of remote sensors, says Smithers, to minimise product defects, cut downtime and maximise production speeds.

The report notes the importance of common standards - particularly standardised machine interfaces - such as the use of Packaging Machine Language (PackML). Smithers predicts that, by 2023, PackML is likely to be a de facto global industry standard.

There is much more to say about Industry 4.0, the impact on packaging, coding and other identification systems, packaging lines and the systems that operate them. For more updates on this critical aspect of the packaging industry’s future, be sure to see the opening webinar and keynote presentations leading into this year’s IAPRI Conference.